The Impacts of the BRI on Europe: The Case of Poland and Germany in cooperation with The Boym Institute

Looking for a topic for your Humboldt, Elinor Ostrom, Bachelor or Master Thesis?

Interested in thinking about “The Impacts of the Belt and Road Initiative in Europe”?

Keen on cooperation with international peers?

Motivated to become part of the LEIZ’ project “Transcultural Caravan” and to join an interdisciplinary research group?

Can’t wait to publish your first chapter in a scientific book?

If you answered at least two of these questions with “yes”, we look forward to receiving your application! For further information on the application process, please see the corresponding section in this document.

The Impacts of the Belt and Road Initiative on Europe: The Case of Poland and Germany

As an ambitious project, the Belt and Road Initiative creates global value chains in a network that connects Europe, Asia, and Africa and that is characterised by diversity in languages, traditions, values, as well as political, social, and economic systems and settings. As one of the most fascinating and risky developments driving the formation of a global society, this initiative represents a global economic, political, social, and cultural experiment with potentially beneficial but also potentially disruptive consequences for all involved.
Against this background, it is important to contribute to the understanding of what the New Silk Road can mean in economic, political, leadership and cultural terms for the European countries involved. This analysis should reveal the practical consequences of the Belt and Road Initiative for Europe in the case of Poland and Germany, as well as their respective social effects.

The following topics are possible for the sub-research projects: 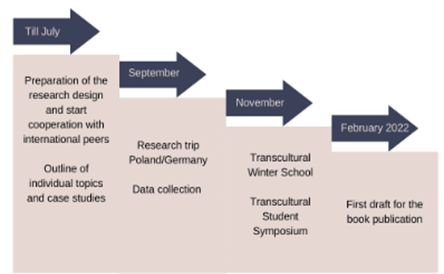 Starting in May, all TSRG 2021 participants will conceptually develop specific research questions that correlate both with their disciplinary background and with the TSRG 2021 overall research topic, together with experts at LEIZ and The Michał Boym Institute for Asian and Global Studies, as well as individual supervisors (ZU professors).  Subsequently, the students will work on these questions together with students from Poland in an academic co-authoring process.
Accordingly, the group consists of several such pairs, who apply the common questions to their respective case studies and disciplines and exchange on their experiences and findings within the group. The case study research includes interviews and field research realized in the pairs and in cooperation with local universities and cooperation partners.

First results of the studies may be presented during the Transcultural Winter School 2021. After having submitted their individual Humboldt, Elinor Ostrom, Bachelor or Master theses, a joint book from all involved students will be published in the “Transcultural Management Series” at Metropolis Publisher.

Interested Polish students from all study programs are welcome and can apply for the TRSG until April 12,2021. To apply for the TRSG 2021, please send an email with your CV and Cover Letter to the Head of the Michał Boym Institute for Asian and Global Studies Patrycja Pendrakowska (ppendrakowska@instytutboyma.org). Please take into consideration that for working on this research project you should reserve around 10 hours per week and be able to take part in research trips to Germany and Poland. We welcome Bachelor and Master students, as well as PhD Candidates.

Paweł Behrendt
Member of the Board at the Boym Institute
pbehrendt@instytutboyma.org

Drug and Road Initiative, that is the Silk Road of drug

We’re Stronger Together – an Interview with Minister Marcin Przydacz

"Cooperation and investments – we are absolutely up for it. However, we prefer to keep a certain degree of caution when it comes to entrusting the transfer of technology and critical infrastructure to external investors. The security of Poland and the EU should be considered more important than even the greatest economic gains..."

At the Boym Institute we are coming out with new initiative: #WomeninBoym, which aims to show the activity of this – often less visible – half of society. We will write about what women think, say and do. We will also publicise what women are researching and writing.

After the darkness of the Cultural Revolution, the times of the Chinese transformation had come. In 1978, Deng Xiaoping realised the need to educate a new generation of leaders: people proficient in science, management and politics. Generous programmes were created that aimed at attracting back to China fresh graduates of foreign universities, young experts, entrepreneurs and professionals.